Oscar and Lucinda have sat on my bookshelf for 5 years. So, knowing I was spending 7 glorious days in Bayahibe, Dominican Republic with nothing to do but relax it seemed like the perfect time to  finally get this Booker winner read. I managed to finish it the day before we left, so it was a perfect choice!

Peter Carey is a prolific writer and this piece of historical fiction about Australia in the mid 19th century was rich with small historical details, based in part by a memoir by Edmund Gosse, the inspiration for Oscar’s back story. The titular characters are extremely well crafted and for this reason the relationship they develop, though at odds with a reader’s wishes, works as it is consistent throughout. There are plenty of plot surprises along the way, and though Carey channels a certain Dickensian style in this writing, the seemingly simple story of a man, a woman, and a wager to get a glass church to Boat Harbour, is a good read.

Well-written, dense but not too dense, it kept me interested right until the bitter end. So, I figured that I would leave it behind on one of the hotel’s bookshelves and hope the next reader enjoys it as much as I did. 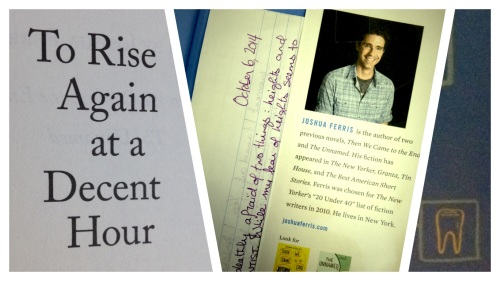 I am deathly afraid of two things: heights and THE DENTIST. While my fear of heights seems to lessen a little bit each year (though you will never see me jumping out of a plane – even at 80) every visit to the dentist amplifies my fear. From the moment I step into the office, my palms start sweating and I have a strong desire to hum just to keep myself from crying. So, when Joshua Ferris’ protagonist in To Rise Again at a Decent Hour turned out to be a miserable shit of a dentist, I felt justified in vilifying THE DENTIST, and longed for his tragic end.

Paul C. O’Rourke is a miserable, cynical, self-absorbed, private-practice DDS. Think of the character Ricky Gervais played in the movie Ghost Town and you’ll get a tip-of-the-iceberg view of what I’m talking about. I wanted him (Paul C. O’Rourke not Ricky Gervais) to get CRUSHED in the worst possible way from the first page! My feelings only intensified when I reached page 30 while simultaneously finding out I needed a filling in real life.

So, when O’Rourke has his identity stolen online early on in the book, it is completely satisfying. There is so much potential and no end to what could happen. Unfortunately, what happens is terrible. Worse than terrible for the reader. The identity thief turns out to be responsible for O’Rourke’s spiritual awakening, or perhaps his ‘anti-spiritual’ awakening. Next thing you know, Paul C. O’Rourke is spiraling out of control, obsessing over love and religion, and trying to make his way into the hearts of others through their belief-systems.

And that was when I tuned out.

Yes, I finished To Rise Again at a Decent Hour, but my heart wasn’t in it. I kept wondering what Ferris was trying to accomplish: to show how easy it is to start a cult? To show how Wikipedia can turn a pseudo-fact into a legitimate belief in a matter of weeks? Or simply to show that we all still need a spiritual life (real or fake) in the modern age? I’m sure his intention is somewhere hidden in those questions but it escaped me. And eventually, I didn’t care.

By the end of the novel, I was bored of Paul C. O’Rourke and didn’t care if he found salvation, nirvana or the psych. ward. I was very disappointed To Rise Again at a Decent Hour even made it to the Man Booker long list, let alone the short list. I will be even more disappointed if it wins the prize next week. But at least I can claim one small personal victory: my fear of the dentist is less than my fear of having to reread this book. Ever.

Reading We Are All Completely Beside Ourselves by Karen Joy Fowler 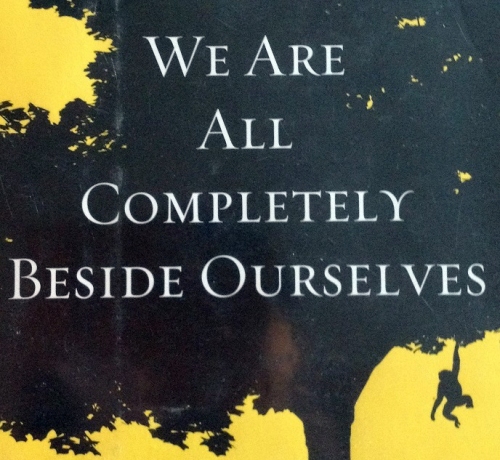 I am currently making my way through the 2014 Man Booker Prize shortlist and WHOA! is it ever different than any other year’s shortlist. Last year’s choices were highly ‘literary’: decidedly tough reads (Testament of Mary, The Luminaries), often long reads (The Luminaries), and not for the faint of heart. This year’s books are (so far) surprisingly ‘lighter’ reads. Not to say they don’t cover deep and meaningful content; they just seem easier to get through. NoViolet Bulawayo’s (pen name of Elizabeth Zandile Tshele) We Need New Names traces a character’s maturation from war-torn Zimbabwe to her later life in Michigan and veers towards some very serious and disturbing events (and thankfully veers away before the metaphorical crashes). Karen Joy Fowler’s We Are All Completely Beside Ourselves recounts the story of a dysfunctional family unlike any I’ve ever met before. Both were enjoyable to read (unlike the struggle I’m currently facing with Joshua Ferris’ book To Rise Again at a Decent Hour).

We Are All Completely Beside Ourselves took me completely by surprise plot-wise, so this is the note I wrote after reading: 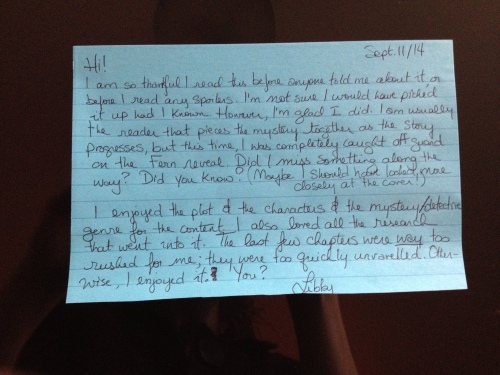 I am so thankful I read this before anyone told me about it, or before I read any spoilers. I’m not sure I would have picked it up had I known. However, I’m glad I did. I am usually the reader that pieces the mystery together as the story progresses, but this time, I was completely caught off-guard on the Fern reveal. Did I miss something along the way? Did YOU know? (Maybe I should have looked more closely at the cover! – Seriously, take a look at the cover and tell me what the book is about, because clearly I am the least observant person on the planet)

I enjoyed the plot and the characters and the mystery/detective genre for the content. I also loved all the research that went into it. That last few chapters were way too rushed for me; they unraveled too quickly. Otherwise, I enjoyed it. You?